"The earth should spin a little faster on its axis, fling us from the trees we'd cling to, hurl us into outer space. Nature is cruel but the cruellest seam runs through us: we dream of apocalypse."
-Lucy Ellmann, Man or Mango? (1998)
Sown by Unknown at 5:51 am No comments:

Art that must enter my brain this year

So January is supposed to be a time for taking stock of your life and to organize your thoughts etc. I tried the whole New Year resolution thing (i.e. to stop swearing and exercise more) only to fail miserably at 9:00 on January 1st when the system at the bookshop kept giving login errors and repeatedly failed to reset. Needless to say, I swore a lot on the first day of 2006. You can only make life altering changes in habit when your head has been sorted out. Waiting for a specific day to do it just indicates that you weren't ready.

I spent these early days of January in a sort of nowhere. Not exactly purgatory, as I did read a couple of interesting things, such as Invisible Monsters by Chuck Palahniuk and the Virgin Suicides by Jeffrey Eugenides. I considered reading The House of God by Samuel Shem, but after karen little's post about the Unreal World, decided on much lighter fare, namely The Easy Way Out by Stephen McCauley. I have chosen two authors to discover during this year. The one is Peter Carey and the other is Armistead Maupin. Initially I picked Rick Moody, but then remembered how much I disliked The Ice Storm.

It's almost award season and once again all the brilliant movies are released simultaneously. Why don't they space them out over the whole year? I know that Golden Globes and Oscars bring hype that money can't buy, but surely these films would take box office from one another by being released within the same couple of months? I guess I'm just annoyed that I'm going to be very broke soon. Here's my list of must-see movies:

These are all nominated films, and there are lots of smaller things I need to go watch. Ooh, can you feel the electricity?

Midsummer. Leading growths are shooting up at record speed, leaves are unfurling and mealy bugs and scale insects are the pests to watch out for during this time. They have a knack for lodging themselves in the centres of new growths, where their feeding causes chlorosis and misshapen leaves. I'm always excited by new roots and the roots of the Phalaenopsis in the greenhouse are wonderfully invasive at this time of year. If only we could have this sort of humidity right through the year.

Laelia tenebrosa. This gorgeous Brazilian Laelia produced two blooms from its sheath this year. The bronze colour is quite distinct, as is the dark throat. A lady of dark mystery, it's just such a pity that the flowers only last about two weeks or so.

Laeliocattleya Mary Elizabeth Bohn. A nice blue cultivar. Blue cattleyas are notoriously difficult to photograph accurately. I've been told that this is because the colour is not so much a pigment as a scattering of light as it hits the epidermis cells of the petals, but I don't know how true this is. The flowers are quite iridescent, though.

Dendrobium Dawn Maree x formosum. This is one of the most beautiful and impressive Dendrobiums I have ever come across. It is a blend of mid to high elevation Himalayan species from the Nigrohirsutae section of the genus. The canes all have a covering of minute black hairs. The huge waxy white flowers have pale green veins across the petals and a rather sensual vermilion blotch on the labellum. My plant produced three flowers from a node at the apex of the most recently matured cane. 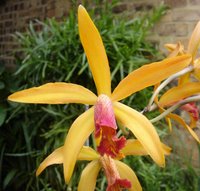 Laeliocattleya Ronselensis. This is a nice compact primary hybrid between Cattleya forbesii and Laelia cinnabarina. The tubular labellums of the star shaped tartrazine yellow flowers (what a lot of adjectives) appear as if painted with red pigment.

Brassolaeliocattleya Fritz Nickolaus x Angelwalker. This trigeneric hybrid has retained all the best characteristics of Cattleya walkeriana, which features prominently in its background. The large square column, intense cerise colour, compact growth and scent like attar of roses makes this a winner.
Sown by Unknown at 2:04 am 2 comments: