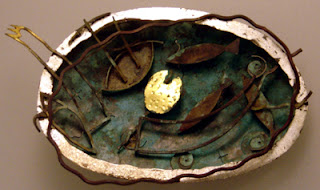 They started switching off all the lights. Green EXIT signs glowed in the twilight and the acrylic eyes of birds in the dioramas followed us as we walked across the parquet floor, past a two-headed skink in formaldehyde and the articulated jaws of a coelacanth. Riding home in the backseat, my young cerebral cortex drowning in globular Zulu pottery and the delicate egg cases of paper nautilus, I realized that I love museums.

It is quite apt that an individual as obsessed with collecting as I should be enamoured of museums: they are grand collections of, erm... collections. Collect, preserve, document, exhibit, display. A myriad of alternative forms behind glass. Variations on a theme, neatly catalogued and archived and ordered in a pleasant, climate controlled environment as you could never find them outside on Darwin's humid and muddy tangled bank. Museums of all kinds beguile me with their charms, not just those institutions devoted to the natural world. 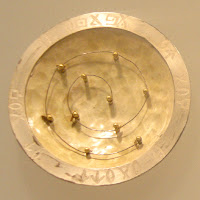 Museums dedicated to the arts have a special allure all their own. Where else could you stand face to face with works of such skill and invention than in a gallery? Each has been a sacred rendezvous in a vaulted space: a small charcoal drawing of a 180° face by Picasso, ablaze with topology in the Pretoria Art Museum; The Ambassadors by Hans Holbein, more luminous in the National Gallery, London, than could ever be portrayed in a mere picture book; the Guggenheim spiralling up to Franz Marc's sanguine yellow cow prancing across a dazzling landscape of the imagination.
The traveller in an unfamiliar city would do well to seek out those small

collections off the beaten path, often overshadowed by the famous collections of art, archaeological artifacts, historical objects or biological specimens of obvious value. These small collections often represent the legacies of those whose passions were so fervent that their collections outlive them. Such museums, displaying pieces amassed by one individual driven by their own particular strain of lust, are often the most interesting. These institutions provide an intimate peek into the psyche of a collector. How wonderfully intrusive: voyeurism disguised as erudition. What drives someone to collect cabinets and even rooms full of antique vibrators, Art Déco cocktail dresses, fruit labels, model buildings made of matchsticks, pinned butterflies, photographs of bridges, circus paraphernalia, stuffed and mounted pets, vintage office equipment, celebrity death masks or Charles and Diana royal wedding memorabilia? 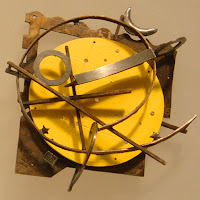 These wonderful and informative collections and their curators share some striking similarities with those persons suffering from compulsive hoarding. Both sets of people acquire large numbers of possessions, seemingly of little value, without wanting to discard them. What differentiates the collector from the human squirrel, however, is that the hoarder's life is impaired, whereas the collector's life is enhanced by the habit. Hoarders never catalogue the junk they acquire. The collector invests time and effort in creating a cross-referenced archive for their precious possessions. "Though this be madness, yet there is method in 't." It is because of this underlying order that the collection accrues value. Without context, without a story, the museum is reduced to glass cases of worthless bottle caps.
Museums, galleries and exhibitions tend to have an air of stuffiness about them. 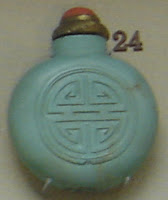 Stale air, dead displays. A museum of natural history appears by its nature to be less alive than a zoo would be. The animals strike the same perennial pose at your next visit, their pelts fading to regulation office colours as time passes on. Insects pinned to tiny labels do not crawl away. Many specimens on display were originally collected by explorers long dead; nothing new to see here, move along. The fact is that most of the action in a museum happens in the basement... Unseen by casual visitors, behind doors marked NO ENTRY or STAFF ONLY, lies unspace inhabited by scores of curators, researchers, historians and scientists. Labs are squashed into the alcoves under staircases, microscopes are arrayed on low benches in rooms unadorned except for the exposed plumbing and air conditioning conduits that lead to the planetarium and the new IMAX theatre above. It is here where the people who love museums even more than the rest of us perform their magic. Collect, preserve, document, exhibit, display. It is here where the stories are teased out of the objects. It is here where that most human of attributes - value - is conferred to lifeless objects.
Images: left, contemporary jewellery from Lucca Preziosa, displayed in the Museu Tèxtil i d'Indumentària, Barcelona; and right, ancient Chinese perfume bottles displayed in the British Museum, London.
Sown by Unknown at 11:30 am 21 comments:

That knits up the ravell'd sleeve of care

It is the time of year when people like to take stock of their lives and partake in the ridiculous custom of making New Year's resolutions. I also indulge annually in such fruitless attempts at increasing the regularity of exercise and reducing the amount of swearing and procrastination. By mid-January, of course, all intentions of generating new sets of admirable behaviour have usually disintegrated. So this year I am going to try a much more sensible approach, one directed at the primary cause of many people's dissatisfaction with their lives. This year, I am not going to try to eat healthier, become less stressed, or be more organized. No: this year I resolve to improve the quality of the sleep I get. 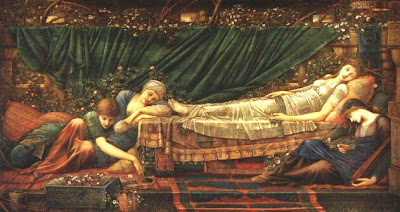 Sleeping is such an essentially absurd activity. We run around frantically during the day, then suddenly we need to lie down and keep quiet for a few hours, only to get up and run around once more. It's a curious cycle that needs to be repeated at regular intervals throughout a healthy life. There is a misconception that sleep is a restful state - the opposite of being awake - simply because we don't move much during sleep. The truth is that being asleep is not akin to being unconscious at all; it is very much an altered state of consciousness. In fact, we spend our lives in three states of consciousness: wakefulness, NREM sleep and REM sleep. Although two of these states are lumped together as 'sleep', they are very different from one another. NREM (non-rapid eye movement) sleep is divided into four progressively deeper stages, culminating in slow-wave sleep which is characterized by rolling delta brain waves on an EEG. Ho-hum. So far sleep doesn't seem that exciting. But as soon as the brain enters REM sleep, dynamic changes can be observed. To the researcher monitoring a sleeping person's EEG, the brain waves would suggest that the sleeper has woken up after the 90 or so minutes spent in NREM sleep. Heartrate and breathing are irregular. The body is responding to some sort of stimuli. Yet the sleeping individual is definitely not awake and lies still, the only movement being that of the eyes under closed lids. The stimuli are not entering from the outside environment through the senses, but are internally generated. It is the only instance when the brain hallucinates and we consider it normal and healthy. This psychosis is more commonly referred to as dreaming. REM sleep is a fascinating but difficult aspect of life to study. What is it for? Why is the brain so active during REM sleep? Why do we dream? One thing is clear: sleep is essential for survival. Sleep heals wounds and stimulates the immune system. We know that reduced sleep significantly increases one's risk of getting involved in accidents, simply due to fatigue and impaired responsiveness. Total, extended deprivation itself can also be fatal: in one study, lab rats died after 11 to 32 days of being denied any chance of sleep, and from 16 to 54 days if selectively deprived of REM sleep only. 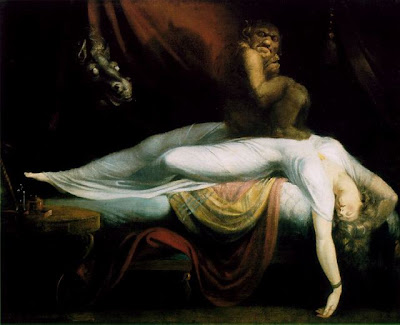 The psychedelic splendour of REM sleep! That warm and inviting abyss of dreams. Turn on, tune in, drop out; no acid required. REM atonia ensures that we don't act out our dreams. This is fortunate for those sharing a matress with a fellow dreamer. The motor neurons that control muscle movements are selectively inhibited as REM sleep is initiated. Sometimes this inhibition is triggered before REM is initiated, or persists for some time after a REM phase. When this happens, you find yourself at the interface between sleep and wakefulness, unable to move. Welcome to the land of hypnagogia, where input from the senses is taken by the brain and stretched, distorted, and expanded through iterations of its own design. This is actually the state you normally pass through on the way to dreamland. However, when REM atonia is accidentally coupled with these sensations, people often feel a 'presence' in the room with them, or a fear-inducing pressure on their chest, an inability to breathe. Voluntary breathing is suppressed under REM atonia and is replaced by involuntary breathing controlled by the brainstem, see. Nothing to fear. Yet we don't want to relinquish that conscious control. The anxiety brought about by such incidents of sleep paralysis has given rise to a myriad of legends about crushing demons, maras and the incubus. And all reports of alien abduction from bedrooms, I expect. Apart from the unlucky few who experience it every night, the majority of sleepers will experience sleep paralysis at most once or twice in their lives. So don't be alarmed and enjoy the ride - after all, you engineered it yourself. 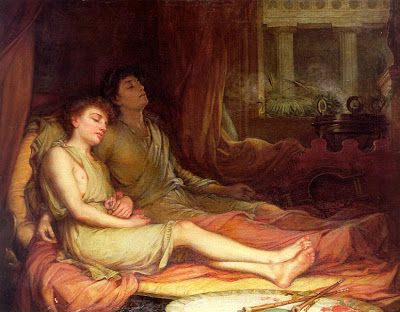 REM sleep disorders are teaching scientists all sorts of things. From how the consolidation of memories works by reinforcing them with biochemical loops in new connections between neurons (you may have to read that again), to fascinating breakthroughs in the relationship between sleeping and eating. Yes, the two are connected. If our requirements for energy, shelter and procreation were somehow met by proxy, would we spend our whole lives asleep? Perhaps that's our true baseline state of being. Apart from sophisticated genetic mechanisms that ensure we live our lives according to circadian rhythms, there are others that trigger wakefulness in response to changes in energy reserves. Small proteins called orexins (or hypocretins, depending on which research team you talk to) are produced by a couple of cells in the hypothalamus for just this purpose. These proteins are the brain's own breakfast bell. Interestingly, when this bell malfunctions, either through mutations in the genes for the orexins themselves or in the genes for their receptors, narcolepsy results. This intriguing sleep disorder really warrants a post of its own. I plan to share my thoughts on this remarkable story in a future piece. It's a tale of obese mice, sleepy dobermans, collapsing teenagers and some of the most elegant experiments in all of molecular biology. 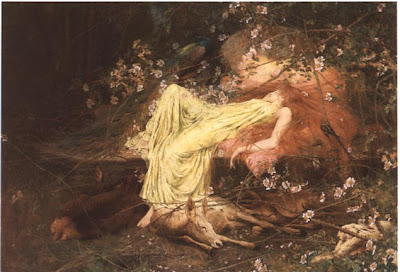 All mammals sleep; we all require it to live. So I'll leave you with some final thoughts about whales. Cetaceans (that's whales and dolphins to you non-biology types) never enter NREM sleep with both hemispheres of their brains at the same time. This is called unihemispheric slow-wave sleep. In fact, they sleep with only one eye closed - the left when the right hemisphere is asleep, and vice versa. Good thinking, to prevent sinking. And drowning, that certainly wouldn't be conducive to the survival of the species at all. Bottlenose dolphins sometimes rest on the bottom, or seem to just float for a bit. More commonly, they slowly swim counterclockwise while sleeping, even when switching brain hemispheres. Smaller dolphins and porpoises are always on the move from birth until death; they are never immobile, the hallmark of terrestrial sleep. Sleep is anything but a restful, unconscious state. Here is the weird thing, though: nobody has ever published accounts of REM sleep in cetaceans; they are the only mammals studied in which this state has never been observed. How do they survive without the third state of consciousness? Why does REM sleep exist, then? How does learning and the consolidation of memory occur? Do dolphins dream?
Sown by Unknown at 7:55 am 26 comments: