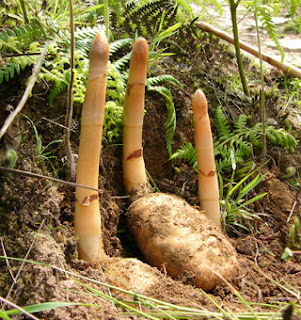 Maori legend holds that you daren't speak its name. When digging for it in the forests of New Zealand, its true name of perei must never be said aloud, or the orchid will hear its pursuers coming and hide away. No amount of digging will uncover its delicious tubers then. It was not formed of the earth like other vegetables, but was a gift sent by the gods. The term maukuuku is substituted for the one true name so that the orchid won't be startled...

Tasting somewhat like cinnamon-spiced potato, the underground rhizomes of the Gastrodia orchid have always lured people into searching them out wherever they grow. Ancient Chinese folklore includes the story of an old man who collected Gastrodia in the mountains every spring. One year, after a complete season of searching without finding a single tuber, the man decided to grow the elusive plant himself. He prepared a field, sowed the seeds fine as dust, and waited. A year later the field was still barren - someone must have stolen his crop. At the next planting season, he set up a shack next to his field and proceeded to watch it, day in day out. At harvest time he dug up the whole field without finding a single tuber. The wise old man concluded that the plant must be a gift from heaven, not meant to be cultivated. He named it tianma, meaning 'from heaven', and since that time everybody knew that no mere mortal could ever grow it. 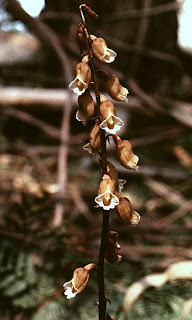 Just by looking at it, one can tell that Gastrodia is no ordinary orchid. It lacks the basic structures that makes things plants, for a start. It has no leaves, no stems, and no roots. All it consists of is a small rounded subterranean rhizome. Infrequently, it will burst into bloom and produce a tall red inflorescence bearing small curious flowers. How does this thing live? Is it magic? How does it obtain nutrients? Why doesn't it need chlorophyll like other plants? Gastrodia is not a parasite, because it doesn't possess structures that enter the vascular tissues of other plants, like the insiduous haustoria of dodder or mistletoe do. It is not a parasite. Or is it? In fact, in a roundabout way, it is. In order to survive, it is entirely reliant on a fungus. This relationship is termed mycoheterotrophy and is a corruption of the symbiotic mycorrhizal relationships between fungi and plants. It is also a pretty neat reversal of the concept of pathogenic 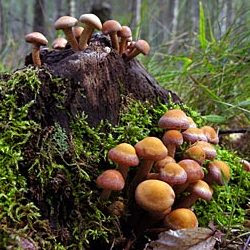 fungi that obtain their nutrients from plants. Armillaria mellea is a deadly fungal parasite of trees. Most of its tissues consist of a mass of underground hyphae called the mycelium, which lives off decaying plant matter in the soil. However, when the fungus finds a tree to infect, these hyphae branch out into fibres that resemble black bootlaces. They rapidly form a network under the bark of the tree, slowly taking nutrients from it and causing the tree roots to rot. Once the tree has succumbed, the fungus sprouts edible fruiting bodies from its carcass, the honey mushrooms so cherished in haute cuisine. 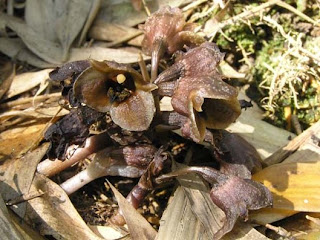 In the wild, all orchids need fungi in order to germinate. Orchid seeds are very small, some consisting essentially of only a couple of cells surrounded by a thin layer of protective tissue. A single orchid capsule can release millions of these seeds to the wind, with the chances of successful germination being very slim indeed. When the seed of an orchid encounters a mycorrhizal fungus, a strange thing starts to happen: the fungus enters the seed. At first it looks like the orchid is doomed. However, the tables are turned and the orchid proceeds to receive nutrients from the fungus. Instead of carrying its nutrients with it in the form of a bigger seed, the orchid relies on the fungus to supply its first meal. Cells start to divide, chlorophyll is made, the orchid turns green, and eventually the tiny orchid seedling can photosynthesize and provide for itself. The Gastrodia orchid interacts in such a way with the fungus called Mycena osmundicola to form its rhizome. There it lies in wait for its next encounter. Armillaria is virtually everywhere; it doesn't need to wait long. Soon the Armillaria filaments come into contact with the rhizome underground and proceed to infiltrate it. This was a mistake. It has now signed a contract to provide the orchid with all its nutritional requirements. Energy flows from diseased and decaying trees to Armillaria and on to Gastrodia. It is a parasite-by-proxy. No wonder no-one could ever cultivate it. They didn't realize that they needed the fungus to make it all work. 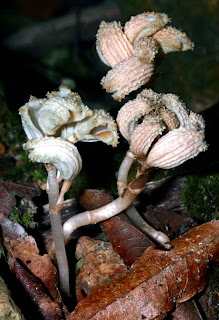 And yet, in an anthropomorphic way, it is as if the orchid has not forgotten its kinship with the other plants it indirectly feeds upon. It reduces the voraciousness of the fungus by the clever use of chemical signals. These fungal inhibitors protect uninfected trees in the forest surrounding the orchid from falling victim to the Armillaria's gluttony. It seems the orchid has planned for the wellfare of its future offspring as well.
Recently, five new orchid species were discovered in the Green Corridor, central Vietnam, by the WWF Vietnam programme and the Forest Protection Department of Thua Thien Hue Province. One of these is a brand new Gastrodia - pictured here - named Gastrodia theana after its discoverer, Vietnamese botanist Pham Van The. With warty pink petals that barely open to reveal a reddish lip lurking within, it really is a bizarre addition to the orchid family. It would be easy to believe that it was listening to every word we say. How soon before this one starts its own mythology? Perhaps it already has a MySpace page.
Sown by Unknown at 2:30 am 19 comments:

Welcome to the digital garden. Thank you to all who voted in the 80th post commemorative poll; the results are in. Taking third place with a mere 15% of the vote is the post about the spicy molecule zingerone. Although the post about collecting 1st edition books is still statistically the most popular with casual visitors to (E&E)², it only managed to attain second place, with 23% of the vote. The surprise winner, as voted for in the poll (and with a massive 31% of the vote), is the post entitled We're one, but we're not the same, dealing with the intimate subject of confession through song lyrics. Read it here. I must admit that this was an unexpected result. You guys seem to have very particular taste!

I hope you like the new version of (E&E)². A big thank you to the supertalented Dalyn from Bruiser Design for the wonderful new header image. Thank you all for reading and commenting. I wish to share much more of the inside of my skull with you. It's a jungle in here.