Wine me, dine me, finger lime me 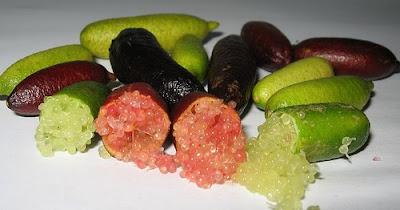 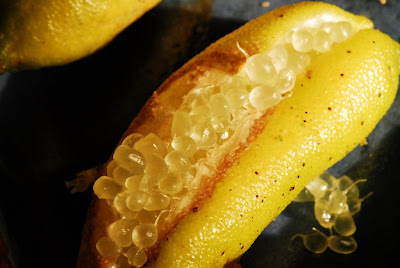 As you can tell from the scientific name, Citrus australasica, the finger lime is native to Australia. It's a thorny tree almost 10 m in height, endemic to subtropical rainforests from northern New South Wales to southern Queensland. The genetic diversity latent in finger limes is evidenced by the huge number of varieties known. The peel colour is very variable and ranges from yellow to green, burgundy and almost black. Beat that, banana skins! The pulp also varies from palest pearl to deepest ruby, with each colour having a unique flavour all its own. 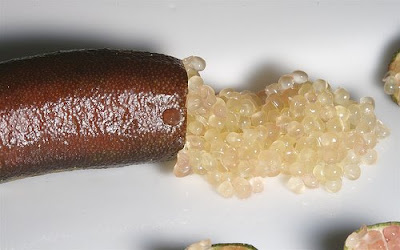 Finger limes are making real headway into the fancy restaurants and boutique grocers of the world, but I'm yet to find one of these tangy beauties anywhere near where I live. In the meantime, a boy can dream, can't he? They can be used in any dish that calls for conventional limes, and are particularly suited to seafood dishes or those with a Southeast Asian influence. With those zesty vesicles shimmering like salmon roe, it's no wonder they've been called 'rainforest caviar'. Imagine some of these added to your favourite after-work drink: instant jungle-style sophistication. Finger limes are especially prized in the world of molecular gastronomy. Ferran Adrià, chef of the fabled elBulli restaurant on the Spanish Costa Brava, was apparently moved to tears by his first experience with finger limes.

That's okay: many people cry after their first time.

It was widely believed during the 18th century that a massive southern continent must exist in order to balance out the landmasses of the northern hemisphere. King Louis XV wanted to claim this Terra Australis for France, and commissioned Yves-Joseph de Kerguelen-Trémarec, an ambitious naval officer, to set out for the Southern Ocean in search of it and to establish trade with its natives.
Braving stormy seas, De Kerguelen discovered an island wreathed in fog on February 12th, 1772. The island was midway between South Africa and Australia, and right in the path of the Furious Fifties: non-stop Antarctic winds that howled across its barren surface from the west. Wind speeds in excess of 150 kph drove waves as high as 15 m around its ragged coastline cut by fjords and inlets. No trees grew there; the interior was almost entirely covered by glaciers. After several expeditions - not all of which made landfall in the rough seas - it became clear that the island was uninhabitable and not the southern counterpart to France everyone had hoped for. Disillusioned, King Louis XV had De Kerguelen incarcerated at Saumur Château for almost four years. Conveniently for De Kerguelen, the French Revolution occurred soon after. Since he was regarded as a victim of the Ancien Régime, he was released and eventually became Rear Admiral and commander of the port of Brest. De Kerguelen died in 1797. But what became of his island, you ask?

On Christmas Day 1776, Captain James Cook anchored the HMS Resolution and HMS Discovery in a bay on an uninhabited island in the Southern Ocean. Cook decided to call the bay Christmas Harbour and the island itself Desolation Island. While Cook's men explored the shore, one found a bottle fastened with some wire to a projecting rock on the north side of the bay. Inside the bottle was a message, written in Latin by one of De Kerguelen's company, Officer De Rochegude of the French frigate L'Oisseau. The message claimed the island in the name of the King of France. Cook wrote in his log, "I could have very properly called the island Desolation Island… but in order not to deprive M. De Kerguelen of the glory of having discovered it, I have called it Kerguelen Land."
And so Kerguelen Island was discovered and named. It remains a French territory to this day. Although the frozen continent of Antarctica was discovered in 1820, perhaps De Kerguelen was not entirely off the mark when he claimed that his island was Terra Australis. In fact, modern surveys of ocean floor topography have revealed that several islands of the sub-Antarctic Indian Ocean are actually the highest exposures of an ancient landmass which sank beneath the surface of the sea about 20 million years ago. This submerged landmass has been named the Kerguelen Plateau. Rich underwater coal seams have been discovered here, evidence of expansive forests that once covered this lost continent. 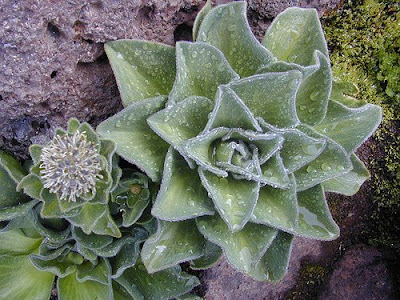 Captain James Cook and his men were exploring Kerguelen Island in 1776, clubbing seals on the shore and collecting fresh water further inland, when William Anderson, Cook's surgeon, came upon a most curious plant. He described it thus: "It was not unlike a small cabbage," having "not only the appearance, but the watery acid taste of the antiscorbutics."It did resemble the Savoy cabbage, but seemed to be a slow growing perennial, as evidenced by its long woody stem. The leaves of this Kerguelen cabbage contained a pale yellow oil, rich in vitamin C.  Having spent months at sea, Cook and his men staved off scurvy by supplementing their meals of seal meat with boiled Kerguelen cabbage. Boiling released all its essential oils, making it even more pungent, but the malnourished seamen took no notice of its strong taste reminiscent of watercress or horseradish. Anderson gave it its scientific name of Pringlea, after Sir John Pringle, who was president of the Royal society at the time. 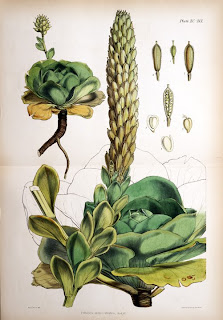 The Kerguelen cabbage had to await the arrival of the Ross Expedition in 1840, before it received a full scientific description. Sir Joseph Hooker, assistant surgeon on the HMS Erebus, catalogued 18 flowering plants, 35 mosses and liverworts, 25 lichens and 51 algae during the Expedition's time on the island, but called the Kerguelen cabbage "perhaps the most interesting plant procured during the whole voyage in the Antarctic".  It was given its full name of Pringlea antiscorbutica, emphasizing its use as a remedy against scurvy. It provided much-needed sustenance to the crew of the Ross Expedition. As Hooker wrote: "During the whole stay of Erebus and Terror in Christmas Harbour, daily use was made of the vegetable, either cooked by itself or boiled with the ships' beef, pork, or pea-soup; the essential oil gives a peculiar flavour which the majority of the officers and crew did not dislike and which rendered the herb more wholesome than the common cabbage for it never caused heartburn, or any of the unpleasant symptoms which that plant sometimes produces." Hooker rightly predicted that the cabbage would be a blessing to future ships that passed by. 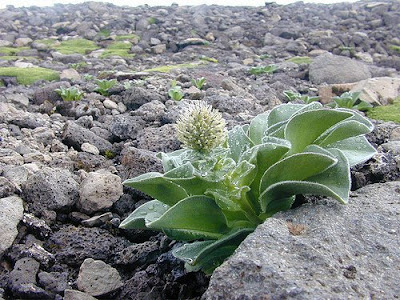 In May of 1973, a letter from a curious reader appeared in the journal Nature, asking whether the scientists on board the HMS Challenger, then bound for Kerguelen to observe the 1874 transit of Venus, would try to collect seeds of the cabbage, so that it may be introduced on the shores of northern Europe and America. Because of its achingly slow growth and predilection for the cold, this feat was thought impossible. Recently, Canberra botanists have managed to successfully grow Pringlea antiscorbutica at the Australian National Botanic Gardens, demonstrating its commercial potential. Perhaps soon Kerguelen cabbage will be de rigueur on the menus of fancy restaurants the world over. Peppery Kergeulen cabbage with smoked salmon and lemon vinaigrette – an acquired taste, I’m sure.
Contrary to its common name, the Kerguelen cabbage is not restricted to Kerguelen Island. It grows on several sub-Antarctic islands, including the Crozet Archipelago, Heard Island, the McDonald Islands, and the Prince Edward Islands. Because of the non-stop strong winds, these islands don't have any winged insects. The Kerguelen cabbage, which is indeed related to the common cabbage and other crucifers, has therefore evolved to be wind-pollinated. It has also evolved to produce high levels of compounds called polyamines in its leaves, which act as a natural antifreeze. 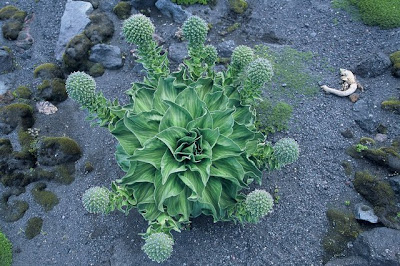 The 1874 Challenger expedition to Kerguelen brought rabbits from South Africa with it. These would serve as a food source for the sealers and whalers that regularly passed by the area. However, with no natural enemies, the rabbit population exploded, causing severe erosion and unprecedented damage to the island’s plant life.  Where rabbits grazed, plants like the Kerguelen cabbage and the cushion plant (Azorella selago) quickly became rare. The Kerguelen cabbage seemed destined to survive only on small offshore islands free from rabbits. The rabbit myxoma virus was introduced in the 1950s in an attempt to control the population. The rabbits rapidly developed resistance against the virus. It gets worse. Climate change is hastening the spread of plant species introduced from warmer environments. In 2004, a rabbit removal study indicated that the rabbits on Kerguelen Island might now be a necessary evil, required to keep the spread of such exotic plant species at bay.
Kerguelen and its surrounding islands are now home to rabbits, rats, mice, cats, sheep and reindeer. Rats and mice eat the seeds of native plants unchecked, since the cats seem more intent on catching seabirds than vermin. Reindeer consume all the slow-growing lichens. Sheep trample the meadows where cushion plants used to provide shelter for albatross nests. Intentionally or accidentally, we are responsible for the introduction of these creatures. What will happen to the Kerguelen cabbage, this wondrous vegetable that saved the lives of so many sailors in centuries past?
What have we done to Terra Australis? Chelsea Flower Show 2009
Originally uploaded by lovedaylemon
It's late Spring. The Chelsea Flower Show is happening right now, which makes for great inspiration in the garden and greenhouse. Best of all, my preliminary exams are finally over. Yes, folks, I have qualified and am now a 'Ph.D. candidate', whatever that means! More frequent posts will hopefully result from my - slightly - more relaxed summer schedule.

Hope to see you all soon!
- orchidhunter
Sown by Unknown at 11:05 am 3 comments: