Buried in lake sediments on Easter Island are fossil pollen grains. These pollen grains indicate that a now-extinct species of palm tree once grew there. All suggestions as to what it might have looked like are inferred from the similarity of its pollen to that of the giant Chilean wine palm, Jubaea chilensis. The Easter Island palm disappears from the pollen record around the year 1650. Some say its demise is inextricably linked to that of Rapanui, the ancient Easter Island society... 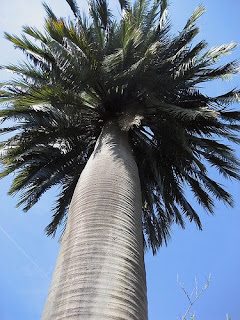 The extinct palm has been named Paschalococos disperta. Some archaeologists have suggested that the palm would have proved most useful to the ancient Easter Islanders. Could they have felled the trees and used their trunks as rollers to help transport those large moai stone statues from the quarry? Perhaps they used the hollowed out trunks as canoes to get to far-off fishing waters. This idea sounds rather romantic, but they probably used reed ships made of totora bulrushes, not hollow palm trunks. It's quite likely that trees were cut down to get at the edible heart of palm... And so the speculation continues. The bottom line is that we don't know exactly why the palms of Easter Island were annihilated. All we know is that a day must have dawned when someone, for whatever reason, decided to cut down the last tree. 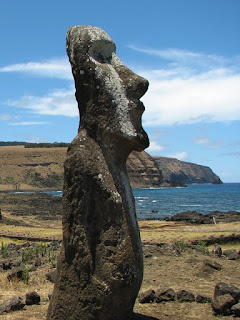 With the island completely deforested, societal collapse seemed inevitable. The lack of trees led to severe soil erosion, still apparent to this day. Other species of animals and plants declined, including the toromiro tree, which was saved from extinction when Thor Heyerdahl collected viable seed on his expedition to the island in the mid-20th century. The toromiro was subsequently entered into a breeding program at the Royal Botanic Gardens at Kew. If only Paschalococos had been that fortunate. Even modern biotechnology will not resurrect this species - the fossil pollen from the lake beds and empty coconut shells found in caves yielded no DNA whatsoever.

Now more than ever, it is clear that our survival is tied to that of our environment. No, not just survival. Our very essence. Everything that defines culture - food, shelter, clothing, medicine, stories, fears, songs, beliefs, temples, tools, traditions, games, dreams - is shaped and nurtured by the plants and animals and microbes among us. Satellites watch Madagascar bleed red earth into the ocean now. Survey ships document tonnes of plastic garbage collecting in the gyres of the North Pacific. The IUCN keeps adding new species to the Red List. Easter Island was a prediction of what happens when biodiversity is lost. Or perhaps not a prediction. A warning - we should know better now. We finally have the tools to manage a whole planet. Collapse is not inevitable.

It is sad that we don't seem to learn from our species' past mistakes. The study of palaeo-environments is invaluable but all that research is useless if we don't apply the knowledge we gain to current situations. There are many examples of this kind of extinction found archaeologically but people don't seem to realise (or care about) the long lasting effects of the choices we make everyday.

Hectic... it's all a bit depressing isn't it.

I concur your excellency.

I've read an article in Archaeology saying that the the humans were not the main cause of the environmental catastrophe. The reason for the extinction of the Jubaea palm is the introduction of the Polynesian rat in the Easter Island (Rapa Nui). The humans might've added to the loss, but it was mainly the Polynesian rats that prevented the growth of many Jubaea palm, as there were no main predators to eat these rats.

The societal collapse was caused by the Europeans when they first visited the island. They killed some of the original inhabitants of Rapa Nui and introduced new diseases that the people couldn't cope up with.

As the archaeologist, Terry L. Hunt said, "I believe that the world faces today an unprecedented global environmental crisis, and I see the usefulness of historical examples of the pitfalls of environmental destruction. So it was with some unease that I concluded that Rapa Nui does not provide such a model...Mistakes or exaggerations in arguments for protecting the environment only lead to oversimplified answers and hurt the cause of environmentalism...Ecosystems are complex, and there is an urgent need to understand them better. Certainly the role of rats on Rapa Nui shows the potentially devastating, and often unexpected, impact of invasive species.

How hard would it be to plant the Chilean wine palm on the island along with ferns and other broad leaf plants that do well in dry weather. Someone with the money could take this island and in a generation turn it back into a tropical paradise.

Why don't they plant some new trees on the island?