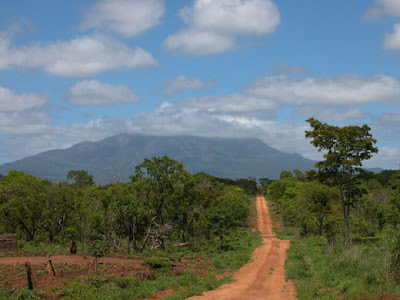 It had been raining heavily all night long. Leaves glistened in the stifling understory; mist rose from the damp ground. Alan’s backpack was soaked through and the Garmin GPS kept cutting out, making it difficult to pinpoint the coordinates of some of the plants they collected. He was secretly glad when Olivia stopped to refill her water bottle. Above them, insects throbbed their mating calls on the limbs of trees. His quads burned from climbing uphill virtually non-stop for two days. The things he’d seen. He was teetering at that narrow interface between exhilaration and exhaustion.

The site was amazing: 7,000 hectares of virtually unexplored medium-altitude forest. The only access road ended several kilometers away at a disintegrating tea estate, long abandoned. They had left the Land Cruiser among the collapsing ruins and hiked the rest of the way. The name Mount Mabu does not occur in classic plant collection records from northern Mozambique. After decades of civil war, local people were only now returning to the area. Most were unaware that the mountain even had a name. And now the scientists from the Darwin Initiative had already collected more than 500 different specimens of plants and animals here. They’ve done pretty well themselves, Alan thought. He’d recorded almost thirty succulents so far, and collected a number of specimens. If only he had coordinates for all of them. Cataloguing is going to be a nightmare when he got back to UCT. Olivia was growing more sullen with each step, though; there was still no sign of the Polystachya orchid. She’d hardly spoken a word in the last four hours.

‘Just stand back and don’t bother it,’ Alan responded. ‘Just let it pass.’

‘Are you sure it’s not just playing dead?’ Alan exhaled, slowly.

‘It’s a Gaboon viper, Bitis gabonica. I don’t think thanatosis is in its repertoire.’ Olivia meticulously stripped the leaves off a fallen branch. ‘But massive amounts of haemotoxin is,’ she continued. ‘They’ve got the largest fangs of any venomous snake. Here, look.’ With this she forced the dead viper’s jaws open with the end of the branch. At the lips and especially surrounding the giant fangs, the inside of the snake’s mouth was studded with glistening brown ticks. Alan wanted to look away. ‘I guess it must have died of infection,’ Olivia said, dropping the branch. ‘Ticks are vectors for all sorts of diseases.’

In a nearby sycamore fig with peeling yellow bark, samango monkeys twittered like birds. Elephant shrews scurried around in the dark, somewhere in the underbrush. A chameleon jerked and staggered towards a mantis, actors in their own silent film. The blue and brown discs of bracket fungi were slowly decomposing a fallen trunk, already in the shadow of saplings that raced skyward to fill the tear in the canopy. It was so hot. This forest seemed inordinately alive. Metabolic. More so than any place Alan could remember from previous fieldtrips. It was almost unimaginable that somewhere outside this verdant realm people busied themselves with their own cycle of birth and life and death. Nurses administered drugs to expectant mothers so that their unborn children wouldn’t share their fate; teenage heads of households sold scrap metal on the dusty streets of Mozambique’s villages; men woke up in the dark to stand in line outside clinics, not aware that their tuberculosis is multidrug-resistant; women planted maize where Renamo militia once planted landmines. Alan thought of all this as he clambered over lichen-covered boulders after Olivia, who was randomly taking photographs. Suddenly they broke through the canopy at the summit of Mount Mabu, and the light was bright, and there were white butterflies everywhere.

The forest they had traversed rolled into the distance beneath them. Above, every layer of the sky was filled with small white butterflies. Some of them were so high up, lifted by air currents, that Alan couldn’t be sure whether they were butterflies or just floaters in the vitreous humour of his own eyeballs. It was quiet. Millions of minute wings flapped continuously, soundlessly.

‘Mass migration,’ Olivia said from a nearby rock. ‘They’re all heading northwest.’ Alan didn’t say anything. For in the back of his mind, an awful thing had sprouted. A parasitic thought had innervated his brain, like dodder inserts itself into the vessels of a host plant. I am going to die here, he thought. In that very moment, their whole excursion seemed like such a dreadful mistake. Planned in secret, organized in haste; the head of his department didn’t even know that he was gone. Was he really that arrogant that he thought this would work? He’d never done anything this impulsive before, and suddenly it terrified him. He was getting sick, he knew. Even with the heat and the humidity, he knew that he must have a fever. He awaited the quivering of his soft palate, that gentle prickling at the back of his throat that heralds the onset of symptoms. It was just a question of time. He had to hide it from Olivia. Avoid panic. Don’t let her know -

‘Dr. Schroder!’ Alan looked up. He had a vague notion that Olivia had been calling his name for quite some time. ‘I said, I’ll give you the photos, so you can share them with Daniel. We may never see such a thing again. Marvelous creatures, insects.’ It was late afternoon, and the butterflies had not stopped. ‘I’m just a bit disappointed that we never managed to find a Polystachya songaniensis. We recorded so many natural clearings and stream banks. I really thought those would be prime habitat.’ Olivia sighed. ‘Perhaps it just doesn’t occur here after all.’

‘I guess I could always try and get DNA from one of those epiphytic orchids you collected earlier today. What was it, Mystacidium?’

‘Aerangis. But I’m not sure of the species.’ The wind started to pick up. The heads of thunderclouds were abuzz with lightning on the horizon to the north. Another wet evening was coming. What do butterflies do when it rains? he wondered. ‘Listen,’ Alan said and cleared his throat. ‘Don’t you think we should start looking for a suitable spot to make camp? It’ll be dark sooner than we think.’

‘Alright,’ Olivia said, strapping on her backpack. ‘Let me just take a picture of those clouds.’ She stepped right up to the edge of the summit, her eyes fixed on the screen of her camera. ‘The light is really good right now.’ And with that Olivia slid on some loose rocks and plunged down a ravine.

To Alan it seemed like he was watching it from outside himself, from a viewpoint away from the summit, somehow suspended next to the mountain in mid-air. He watched as she fell several meters towards a rocky ledge. He watched as her left ankle was jammed between large boulders studded with aloes, their succulent leaves sparkling like jade in the afternoon glow. He watched as the momentum of her descent swung her around, pivoted her around her jammed ankle with an audible snap of bone and tendon. He watched as her skull connected with the rock of the cliff. He watched all of this from outside himself. A few seconds of quiet. Olivia’s camera smashed into pieces at the bottom of the ravine. Alan’s next thought was that he would now never be able to share the butterfly migration with Daniel.  The weight of her backpack wedged her ankle firmly into the crevice. Olivia hung down there, out of reach and limp, like someone who had been crucified upside-down. Unconscious? Dead? Alan had no way of knowing, and no way of getting to her.

It was all such a dreadful mistake. Shouting her name had no effect. Alan had to get off the mountain as fast as possible, seek help. He did the only thing he could think of: he ran. It didn’t matter that it took them two days of hiking to get there from where they left the Land Cruiser. It didn’t matter that the nearest civilization was half a day’s drive away. It didn’t matter that his skin was ripped by thorns and branches slashing at him as he ran. Nothing mattered, apart from his muscles propelling him down the jungled slopes. He tried to ignore the soreness at the back of his throat, tried to ignore the swollen lymph nodes down the side of his neck. This is how you die, Alan thought. Not in a car on the highway. Not on the treadmill in the gym. Not in a comfortable bed, surrounded by people you love. This is how you die: small and alone in the woods, by claws and venom and poisonous sap. Viruses wait in the dark forest for you, have been waiting for thousands of years for people to come and reawaken them and absorb them and take them to the cities.

It was dusk when Alan ran into a forest clearing. Alan stopped to catch his breath and take a drink. It was a rocky patch next to a stream, populated by grasses and aloes. The soil was too shallow for large trees here. Growing between the rocks, almost hidden by tall grass, Alan saw the orchid. From Olivia’s descriptions and botanical illustrations at the Compton Herbarium, it was undeniably Polystachya songaniensis. None of that seemed to matter now. Rosettes of green leaves supported tall inflorescences with several small blooms. They were everywhere in the clearing, all around him. For some reason, Alan had assumed the flowers would be blood red, but they weren’t. The flowers were pink.

Ditto! Beautiful and brilliant! Your blending of science within story is masterful. I have to go to the beginning and read it all, but I am hooked! Such a different life...a different world. The way your words are almost a calling...

I love it... he he. So jealous that you managed to finish one!
Basically you need to let us know what happens to Olivia in the sequel - he he. As someone who found Generation stimulating for half a second in the 90s I need to know! he he
Good job my friend.